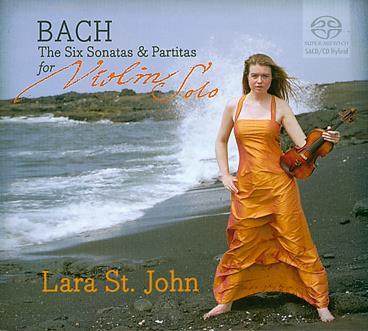 Young Canadian violinist Lara St John made her mark in the 1990s with two Bach albums, including commendable accounts of BWV1001, 1004 and 1005, and some eye-popping cover art. She now offers all six sonatas and partitas in new recordings and in Super Audio surround sound.

Her approach here is vastly different from her somewhat raw and occasionally brash initial efforts. The freedom of her interpretations may upset some traditionalists; but it lends a winning spontaneity, even if the wavering pulse of the finales of BWV1001 and 1006 and the Giga of BWV1004 is disconcerting. Puzzling, too, are her purposeful separation of the powerful Ciaccona’s central major-mode section and the movement’s disproportionately long final note (BWV1004), and her express tempos for the Corrente of BWV1004, the Double of BWV1002, the finale of BWV1005, the Preludio of BWV1006 and the fugue of BWV1001.

St John is particularly adept at balancing the interplay of internal parts and preserving continuity of line and rhythmic flow, as in the three sonatas’ fugues, each played with an overarching sense of shape and fulfilment. There is energy and vigour in her finales of BWV1001 and BWV1002 and a keen sense of dance in the relevant movements of BWV1006. There are also some sublimely lyrical moments, notably in the reflective Grave and poetic Andante of BWV1003 and the lilting Siciliana of BWV1001; and she conveys the gravitas of Bach’s language with mature assurance, resorting almost to ‘bending’ some notes a semitone apart for expressive harmonic effect (for example, in the Adagio of BWV1005). These attributes, combined with her clean, accurate left-hand technique, her keen ear for tonal colouring and the highly individual, largely unforced sound that she produces from her 1779 ‘Salabue’ Guadagnini violin, result in a thought-provoking achievement from a rapidly maturing artist, beautifully recorded in a unique three-dimensional manner.