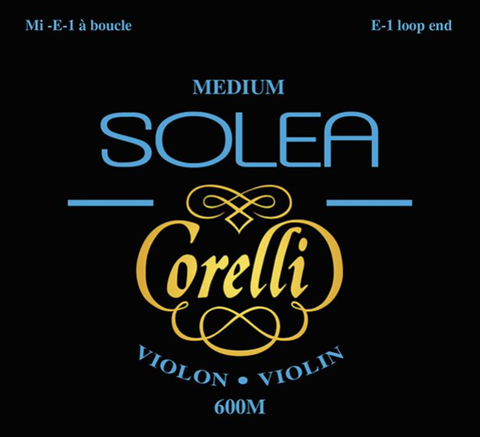 Before French string manufacturer Corelli designed their new set of violin strings, they asked a group of players what they didn’t feel was already available on the market. ‘They wanted a sound that was clear and focused but without a metallic edge,’ says Bernard Maillot, president of Savarez, which owns the Corelli brand. ‘Added to that was a desire for better playability and faster response, which is exactly what the Solea strings offer.’ Although he won’t be drawn on exactly what they are, Maillot credits ‘two brand new materials’ with Corelli’s ability to cater to these requirements. ‘The strings are completely different from anything we’ve made before,’ he adds.

The Solea set consists of a carbon steel E string, and metal-wound A, D and G strings with multi-filament synthetic cores. ‘The high carbon content of the E string is what gives it brilliance without running the risk of sounding aggressive,’ Maillot explains, but he appears most excited about the construction of the rest of the set. ‘The high density and elasticity of their cores are characteristics of the innovative polymer we’ve used, and are what bring both richness and brightness to the sound. For the winding, we had to develop the manufacturing technology we used as the new alloys require even greater precision.’

The players Corelli surveyed wanted a sound that was richer in harmonic overtones, as well as clarity of tone and ease of sound production. ‘The strings have been engineered to offer overtone spectrums that are resonant and balanced – and don’t come at the expense of focus,’ says Maillot. Another priority was harmonics that sound quickly and reliably under the bow. ‘They speak better and with an improved tone when played on these strings compared to others on the market. Whatever you’re playing, the Solea strings have been engineered to help players produce a clear, nuanced tone right across the instrument.’