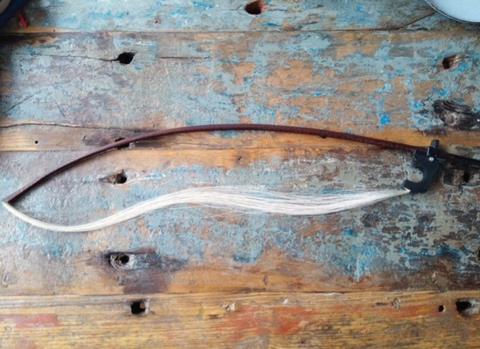 I wanted to be able to accompany the guitar in my jazz trio with more than just two notes of the chord,’ explains violinist Charlie McCarthy. ‘Playing really far up the fingerboard lowers the action enough so you can just about touch three strings, but it isn’t a comfortable solution.’ Instead, the Tasmania-based musician collaborated with local maker Philip Smith to create a bow that could simultaneously play three or even four strings with ease. A mechanism concealed inside its frog allows the hair to be loosened, enabling it to fit the curved form of the bridge and play all four strings simultaneously, while the curved, Baroque form of the stick creates the extra distance required between it and the hair.

McCarthy compares using the bow to operating a pair of scissors. The hinge is controlled by the right thumb, while a small lip on the upper side of the stick allows the fingers to take the weight of the bow while it is being used. ‘It’s so simple to use that you can even tighten or loosen the hair part-way through a single bow stroke,’ McCarthy says, while pointing out that there are some tasks to which the bow is not ideally suited. ‘Just like there are limitations to how many strings a standard bow can play at once, there are some techniques – spiccato, for example – that this bow makes more difficult. If I know I’m going to have to do something like that, I just keep a standard bow close to hand as well, but there isn’t much in the way of standard playing the Polycorde bow can’t handle.’

The bow’s relatively high price point, McCarthy says, reflects the time and skill invested in its custom-built frog. Together with Smith, however, he is exploring whether these could be 3D-printed instead, to reduce time and labour costs, while other plans include developing versions of the bow for viola, cello and double bass. Helpful videos on the Polycorde website show McCarthy demonstrating the bow, and even offer advice to players seeking to hone their skills while using it.