A Violin's Life, Vol.2: Music for the ‘Lipinski’ Stradivari; Beethoven: Violin Sonata no.9 in A major op.47 ‘Kreutzer’; Maier-Röntgen: Violin Sonata in B minor; Tubin: Sonata for solo violin 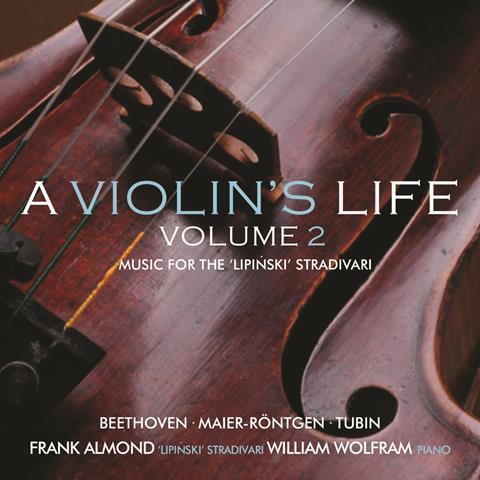 The second volume of this project further charts the 1715 ‘Lipinski’ Stradivari’s history via repertoire associated with it. Between volumes, this priceless instrument was stolen from its guardian, Frank Almond. Although it was recovered, relatively unscathed, such misadventures underline the value of preserving for posterity the tonal attributes.

Almond and William Wolfram are persuasive advocates for the bittersweet, Schumannesque Violin Sonata of Julius Röntgen’s first wife Amanda Maier. They relish the dark character and passion of its uneasy opening Allegro, contrast the barcarolle-like Andantino with its central quasi-scherzo section and bring out all the drama and fun of the rondo finale. Almond’s approach to Eduard Tubin’s solo Sonata (1962) is often forceful and uncompromising, yet his tonal sonority, clarity of articulation, technical assurance and deep understanding of the work’s structure and character combine to forge a magisterial performance.

This duo’s account of Beethoven’s ‘Kreutzer’ Sonata is mostly fresh, committed and unfailingly musical, even if there are several more accurate and spontaneous versions available in the marketplace. But this disc is more about the merits of the instrument than of any performer; the distinctive qualities of the ‘Lipinski’ are never in doubt and the well-balanced, natural recording does them full justice.