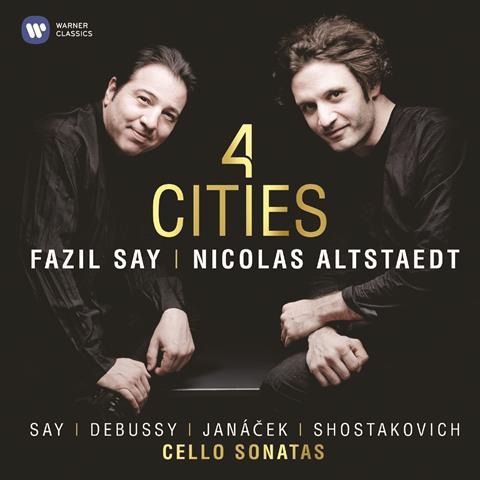 Sivas, Hopa, Ankara and Bodrum: these are the four Turkish cities evoked so vividly by FazÄ±l Say in his 2013 cello sonata. At least in music, their beauties are more than picturesque, and I would jump on a plane to see them, but I’d want to keep my wits about me amid the wild tumult of Hopa and the nocturnal thrum of Ankara. Only in the hand-me-down jazz of the brief Bodrum finale does Say disappoint as a composer; at the piano he is a continually stimulating foil to Nicolas Altstaedt (the two musicians share equal billing both on the cover and in front of the microphone). In that way their partnership reminded me a little of Rostropovich and Britten, for Altstaedt’s playing has put on muscle-tone since his debut on disc a decade ago (another stimulating mix, of Bach, Beethoven, Stravinsky, Webern and Ligeti – reviewed January 2007). However, his mischievous rubato in Debussy’s Sonata is his own, and the rustic Pohádka (Fairy Tale) is full of those sad little asides and abrupt surges that belong so authentically to the world of Janácek. In the more blatant grotesqueries and laments of Shostakovich’s Sonata, Say and Altstaedt are even tighter and more uncompromising than even Rostropovich and Britten.