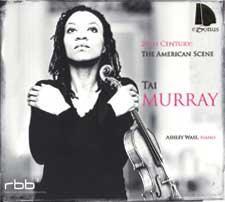 It’s a bold ambition – as the fine booklet notes in Tai Murray’s generously filled disc admit – to try to encapsulate the breadth and diversity of 20th-century American violin music on a single disc. But Murray’s choice of repertoire is bracingly effective, and serves to show off her vigorous, dramatic playing style excellently – for the most part.
Murray attacks the Copland Sonata’s finale with gusto in a highly charged performance, and she’s full of passion in the first of Elliott Carter’s bountiful 4 Lauds. The concluding Corigliano Sonata fits her like a glove, its neo-Romantic harmonies and Stravinskian rhythms the ideal vehicles for her warm, rounded tone and sweeping, large-scale phrasing.

She’s far less persuasive, though, in slower, quieter music, and throughout the disc, when the tempo drops and things calm down, her sound wavers, fluctuates and even sometimes breaks up alarmingly – something made only more apparent by the extremely close recording that leaves no detail unheard. It’s most apparent in the Cage Six Melodies, which the composer instructs to be played with a light-bowed, breathy sound, but which Murray turns into almost a ‘Klangfarbenmelodie’ of contrasting tones on different notes.

And strangely, her volatile, unpredictable playing stands in stark contrast to the beautifully poetic, considered pianism of Ashley Wass, a sensitive presence throughout – and indeed the disc’s highlight.