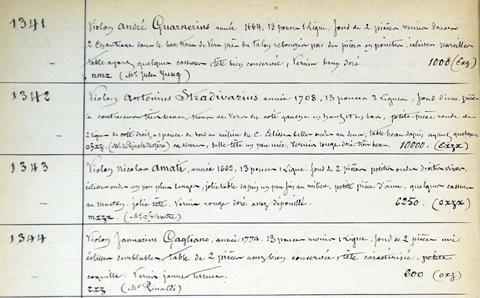 A code used in the sales ledgers of French violin dealers Gand & Bernardel has finally been cracked, 170 years after it was first devised. Jean-Philippe Échard, curator of the bowed stringed instruments collection at the Musée de la Musique in Paris, deciphered the code with the help of computer scientist and cryptographer Pierrick Gaudry. The code was used to safeguard the prices of more than 2,500 instruments at Gand & Bernardel's Paris shop, including purchase price, repair costs, reserve price and the final sale price.

According to the researchers, the code was introduced in mid-1847, two years after Charles- Adolphe Gand succeeded his father, Charles-François, as head of the workshop. It continued to be used by Gand and his successors, including business partners Gustave and Ernest Bernardel, until 1921. The code was used only to encrypt numbers into letters: the researchers hypothesised that Gand may have introduced it in order to be able to open his sales ledgers in front of customers without giving away significant prices; or, possibly, to keep the figures away from the eyes of tax inspectors.

In the sales ledgers, most prices were represented by lines of letters: the reserve price of a 1707 Stradivari in 1911 was represented as 'mxzxz', while the final sale price was 'ooxxz'. Given that most lines ended with a combination of 'z' and 'x', the researchers deduced that they both referred to '0'; using a substitution cipher they worked out that the numbers 1–9 and 0 were represented by the word 'HARMONIEUX'. 'The choice of the adjective as a code key by a dealer of musical instruments is very understandable in a musical context,' they noted. 'In particular, one should note that the front part of the violin, the soundboard, is named in French “table d’harmonie†.' Hence, the reserve price referred to above was 40,000 francs, and the final sale price 55,000 francs.

The researchers concluded: 'This decoding opens the way for the complete analysis of the data from these ledgers, leading to the objective description and understanding of the workshop’s business practices for used instruments over more than seven decades.' The full research paper can be downloaded here (PDF)