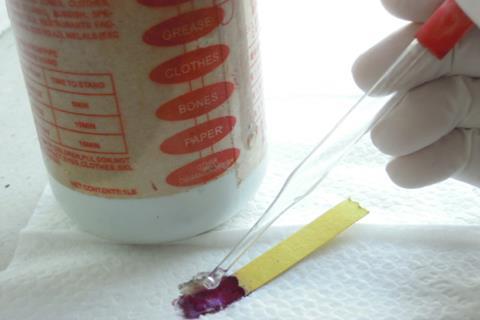 An 18-year-old girl has been jailed in Scotland for pouring sulphuric acid drain cleaner into a fellow school orchestra member’s viola case in a revenge attack over a love rivalry.

Emily Bowen, who was 17 at the time of the incident, is reported to have been angry because the victim, Molly Young, was seeing her ex-boyfriend. She bought sulphuric acid online in the form of One Shot brand drain cleaner, and poured it into the viola case while it was unattended in the music room at Knox Academy in Haddington, near Edinburgh. When Young retrieved the case, the acid spilled on her legs and caused significant burns requiring surgery.

Edinburgh Sheriff Court sentenced Bowen to 21 months in jail as well as a five-year non-harassment order forbidding her from contacting the victim.

Bowen admitted planning and carrying out the act, and while her defence told the court that she had been diagnosed with autism and depression, but the fact that her phone revealed she had been reading news articles about acid attacks was considered damning.

The sentencing sheriff said: ‘It must be plain to anyone who resorts to acid for whatever purpose that the courts will not tolerate its possession or use for any criminal act. It is with considerable regret that I have come to the conclusion that nothing but a custodial sentence is appropriate.’