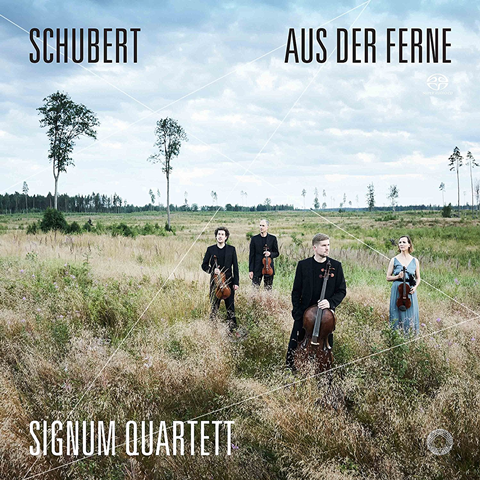 Those who know their Schubert will already have spotted that ‘Aus der Ferne’, or ‘Song from Afar’ is not a string work, but a Lied he composed in 1814, describing a ‘magical land of the past’. From this wistful opener, arranged by the Signum Quartet’s viola player Xandi van Dijk, we move through five more, punctuated by the disc’s two genuine string quartets. First, the Quartet in B flat major no.8, penned the same year as ‘Aus der Ferne’. Then, the ‘Rosamunde’ Quartet of ten years later, whose own literary beginnings have already been trailed by both ‘Die Götter Griechenlands’ on which its Minuet its drawn, and the ‘Hirtenmelodien’ (Shepherd’s tunes) from the play’s incidental music.

As for the Signum’s interpretational attributes, top of the list are its clean and focused tone, precise articulation and perceptive applications of varying vibratos, all of which add up to some luminously lucid textures. There’s its impeccable blending, achieved within an overall balance weighted most often towards the first violin, followed by the cello, with the other two hugged close behind.

Then, while the quartet can certainly do angry forcefulness and biting vehemence, perhaps their readings’ greatest beauty is the intimate emotional trinity they intertwine of dignity, fragility and pain. In fact just listen to their ‘Du bist die Ruh’, for then I need say no more.