Did the Cremonese have access to wood with unique special qualities?

Were the old Cremonese luthiers really using better woods than those available to other makers in Europe? In this article from 2013, Terry Borman and Berend Stoel presented a study of density that suggested otherwise 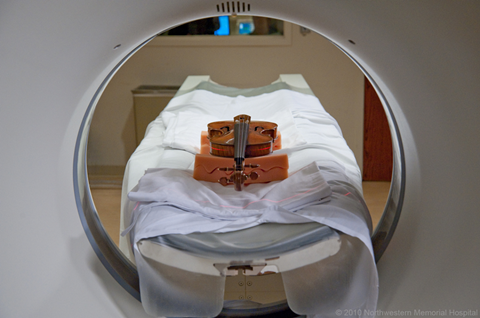 A violin awaits testing on a CT scanner gantry

As all luthiers are well aware, the business of making an instrument of the violin family is fraught with pitfalls. There are countless ways to ruin the sound of the finished product, starting with possibly the most fundamental decision of all: what wood to use.

In the past 35 years we have seen our knowledge of the available options expand greatly – and as we learn more about the different wood choices, it is increasingly hard not to agonise over the decision. What are the characteristics we need as makers? Should we just look for a specific grain line spacing, or a good split?

Those were the characteristics that makers were once taught to watch out for, and yet results are difficult to repeat from instrument to instrument when using the same pattern – suggesting these are potentially not the most important issues to consider.

Over the centuries, many people have theorised that the classical Cremonese makers had access to wood with some unique special quality, and therein lay the fabled lost ‘secrets’ of Stradivari. To test this conjecture, we set out to compare the wood employed by the classical Cremonese makers with that used by other makers, during the same time period but from various regions across Europe.

This would eliminate one variable – the ageing of the wood – and allow the tracking of geographical and topographical variation. In particular, we wanted to investigate the densities of the woods involved, which we felt could be the key to unlocking these secrets. 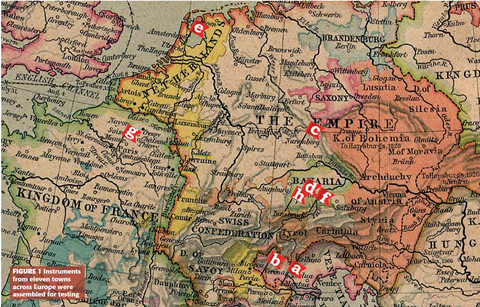 ‘In fact, density is most likely the best single predictor of mechanical properties of clear, straight-grained, defect-free wood.’

In addition, scientific research has shown direct links between density, Young’s modulus and damping. These links do not give exact values by any means, but they give a good approximation of expected range. If we get reasonable readings on these parameters, we can at least start from a solid footing. Selecting wood that fails to meet basic criteria will at best be the equivalent of starting with a severe handicap.

No matter how hard a luthier works, it would have been better to start off with a different piece of wood. And density, this key prognosticator of instrument wood quality, is a measurement easily obtained from blocks of wood prior to beginning an instrument.

Finding out the density of 18th-century instruments (and indeed, virtually any useful information about the wood involved) used to be very difficult. Until recently, it was necessary to remove the top or back of an instrument, wrap it in a waterproof bag, put it into a container of water to measure the displacement (volume of wood) and divide that by its weight. Naturally, not many musicians or owners allowed this kind of work. Only in the past 10–15 years has access to CT scanners increased, so that we can now ascertain the density of an instrument’s parts in an entirely benign fashion. From the instrument’s perspective, it is merely a short ride on a sliding table.

In 2008 we published our first article on wood density based on CT scans. In it, we gave density measurements for five classical Cremonese violins – two made by Stradivari and three by ‘del Gesù’ – along with results from eight modern instruments. We found strikingly little difference between the mean densities of the antique and modern violins.

This was an interesting finding, as it suggested that the classical Cremonese makers never used anything that modern makers couldn’t. As promising as this research seemed, our data set was small and we needed it to grow to be able to draw accurate conclusions. With that in mind, we designed our next study – to compare classical Cremonese instruments with those from the same time period but from other areas around Europe.

We were able to collect 13 antique instruments from our target period, built prior to 1750 (figure 1). We also added four more modern instruments for the sake of comparison.

All the instruments tested had spruce tops and maple backs (in general, spruce has a much lower density than maple). Further, all but one were violins, the exception being a 1710 viola by the Dutch maker Pieter Rombouts. We had a violin by the same maker, as well as instruments by Hendrik Jacobs and Willem van der Syde. From Germany we had violins by Matthias Klotz and Leonard Maussiell, plus one unknown maker from Füssen; representing France we had a 1719 Jacques Boquay; and for Austria, two violins by Jacob Stainer. To test a non-Cremonese Italian violin, we also analysed a 1698 violin by Pietro Guarneri of Mantua. 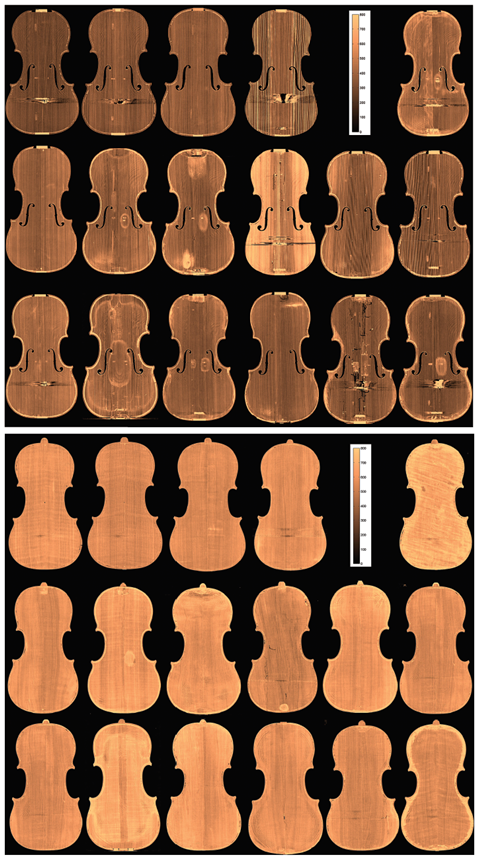 When the scans were complete, the data was analysed in our dedicated software and hundreds of thousands of density measurements were taken from the exact centres of the individual plates. These samples were then configured as density maps. Figure 2 presents these maps for the tops of the instruments scanned, and figure 3 those of the backs. The density of each one is represented by the varying shades of brown: the darker the colour, the lower the density, and vice versa. In figure 2 an extremely light spruce violin belly can be seen, indicating its extremely high density – actually denser than most maple wood, which is atypical for good-sounding instruments.

In these images, the top should appear equally striated from top to bottom. When there are variations, it is likely that these are the effects of higher-density glue used for repair patches. Since our samples were taken from the exact centre of the total thickness of the plate, we do not see other wood such as cleats in this image, but we do see evidence of places where wood has been removed and replaced (as in patches).

From each of these maps, we chose five sample areas on each plate that had no repairs in their immediate vicinity. If there were, we adjusted as needed. All the sample areas were 3cm squares, located in the upper treble bout, upper bass bout, lower bass bout, lower treble bout, and one sample near the bridge (but to the right of the centre glue line, to avoid contamination from the glue). We then analysed that data to arrive at final density measurements for each plate. 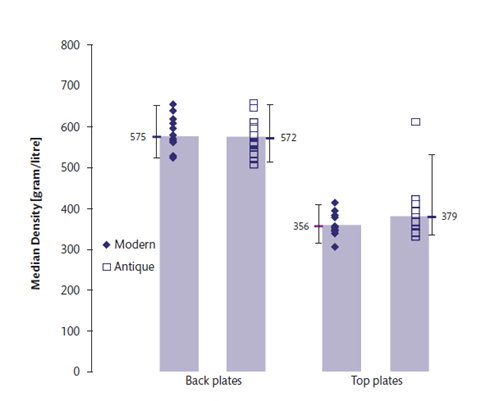 The combined results from the two studies are presented in figure 4 (page 52), using data obtained from a total of 29 violins and a single viola. With the instruments’ median density (in grams per litre) on the vertical axis, the four vertical bars show the comparison between the antique and modern instruments for the top and back plates.

In the results for the antique instruments’ top plates, there is one clear outlier at the top, with a median density significantly higher than the rest. This is the extremely light belly seen in figure 2, and is probably a ‘reaction wood’: something negative had happened to the tree (a limb severely bent from snow or ice, for example) and as it continued to grow it tried to recover. In that process, the wood forms differently over time, and is usually quite a bit denser than unaffected wood. 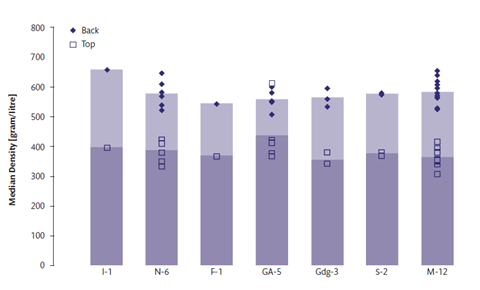 Figure 5 presents the results broken down by country of origin. These appear to show that the density of the wood the classical Cremonese makers were using varied very little from that used by contemporaneous makers throughout Europe, as well as from what modern makers are choosing today.

Of course, wood varies in density from tree to tree – and even within the same tree depending on diameter and height. Often the variations can be quite dramatic, as in the case of the instrument tops. The striations in wood are due to differences in density between fast, early-growth wood in the spring, and slow late-growth wood in autumn.

Particularly in light of the relationships between density, stiffness and damping, we believe that the wood used by the classical makers (at least what we have been able to study to date) is quite similar to wood that modern makers can access. All of this may seem like a singularly boring result, yet it sheds light on important aspects of wood selection that makers can use to their advantage.

When makers test their wood for density, they now have targets that have been shown to work, and have some information about the stiffness and damping of the material they are choosing. (This information is readily available in visual format in the work of Michael Ashby and others.)

We do not want to oversimplify a very complex set of circumstances that account for great tonewood, but it is possible that some of the complexity regarding the wood of the great classical Cremonese makers is made in the mind of man.

Over the years, many hypotheses have been presented regarding differences in the wood used by classical Cremonese makers that purportedly account for their sound. These irreproducible factors, it is said, are the reason for the lost ‘secrets’, which prevent modern makers from creating instruments that sound as good as these venerated works. However, we have found no significant differences, at least in density, to account for any lost secret.

Possibly, the classical Cremonese makers were simply very good at what they did and there are no lost secrets to be found. It is also possible that what we hear is influenced by what we have been told. If we go on the assumption that just about everything in life can be reduced to physics or psychology, maybe the psychological impact of knowing a particular instrument was owned by revered musicians over time and cost millions plays a larger role than we are aware of.

One of our planned follow-up studies will test the differences between woods that have undergone different kinds of treatment (such as soaking, boiling, or treating with acids or alkalis). However, even if a particular treatment does prove to be effective at changing the wood’s density, would we even want to? The wood chosen by Guarneri ‘del Gesù’ and Stradivari, at least in the instruments we have studied, is virtually no different from that which we have access to already, so it would appear that significantly altering its density might end up being counter-productive after all.

This article was first published in the January 2013 issue of The Strad.

All photos and figures Terry Borman and Berend Stoel. The authors thank Ronald de Jongh for his help in gaining access to instruments