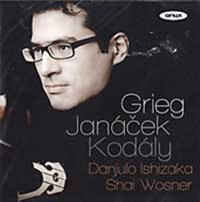 Danjulo Ishizaka and Shai Wosner are mesmerisingly brilliant in this superbly recorded and imaginatively programmed recital. In Janácek’s Pohádka, the fantasy element of the fairy tale based on Zukovsky’s Tales of Tsar Berendey is passionately told, almost with the clarity of a picture book. Emotion is also never far from the surface in Grieg’s often turbulent Cello Sonata, and again both artists are utterly persuasive. The virtuosic passages of the opening Allegro are delivered with sizzling élan, the central slow movement is profoundly intense and the finale builds up to an exciting coda. Throughout, the feeling for the musical narrative is always varied and highly charged.

Ishizaka is simply sensational in Kodály’s Solo Sonata. He proves masterly in creating cogency with what can often seem quite rhapsodic material. In the first movement, he is particularly effective in negotiating the awkward transition to the restatement of the opening material – a passage that can fall flat in lesser hands. The ensuing Adagio is simply magical with Ishizaka presenting a compelling kaleidoscope of emotions, initially melancholic and poetic, then furiously intense and finally more reflective. Although many of the technical fireworks occur in the finale, it is the hardest movement to pull together, with almost too many ideas. But Ishizaka takes the reins with assurance, and generates a cumulative sense of exhilaration and heroic conquest.