How to develop an expressive vibrato

Just one beautiful note is all we need as a starter for a gorgeous vibrato, writes Phyllis Young 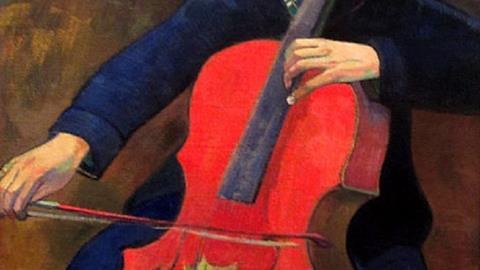 The fascinating technique of vibrato is actually based on something very ordinary and common, so we should never be afraid of it. After all, we have been shaking things since we spotted the rattle in the cradle. So how do we do it? Unconsciously we pick a centre spot and move an equal distance away from it on each side with the motion in one direction generating the motion in the opposite direction. Think of waving to a friend arcross the street or rubbing out a mistake: the key ingredient in both - as well as in vibrato - is balance.

Just one beautiful note is all we need as a starter for a gorgeous vibrato. And the nicest part of it is that almost all players have one note on their instrument that seems to stand out above all others because the vibrato seems easy and natural. Half the trick is identifying it and observing the finger that has played it. The other half is discovering how to transfer that feeling and sound to every spot on the fingerboard.

I call this the Best Note Principle. Naturally we will continually change and colour the tone for expressive purposes but the advantage of the Best Note Principle is that we have our own Pavarotti tone with us at all times, ready to be imitated. I believe the basic tone of a string player is as personal as their speaking voice. But suppose we haven't discovered a favourite note worthy of imitation?

Let us examine some conditions and activities which can help make the fìrst or remedial vibrato experiences successful ones. I write from a cellist's perspective, but most of the ideas can be adapted to other stringed instruments.

Placing the emphasis on imagining the world's most beautiful vocal tones, and trying to discover how to imitate these sounds through the instrument is one of my foremost teaching goals. I am convinced that vibrato should be introduced only after the student has developed bowing skills that can produce big tones that are not harsh. I also believe that the early vibrato motions should be wide and free, involving the enthusiastic voluntary shaking of every part of the forearm, hand and fingers, with an involuntary jelly-like movement in the fatty tissue inside the upper arm. Unlike the oyster's pearl, which grows from a tiny grain of sand to a larger gem in its environment, I prefer what I call the Michelangelo Approach. To create his sculptures Michaelangelo would select a large chunk of material and gradually refine it into a work of art. Although we string players start with nothing but our tools and are required to create our own building material (tone), we too need plenty of it to mould and colour. In that sense we are builders as well as sculptors.

One important reason for developing a full tone before introducing the vibrato technique is that, for the tone to be beautiful, the amplitude of the string's vibration and the vibrato's width should match. A small, narrow vibrato can sound lovely when the string's vibration is also narrow and the tone is soft; however the same narrow vibrato used with a loud tone produced by wide string vibrations will sound harsh and strident. Equally, a wide vibrato used with a soft tone can sound ridiculous and cause the student to back off from it.

For a more advanced player, changing a well-established habit of always playing with a fast, narrow vibrato to a wider one can be extremely difficult and frustrating because the muscles in the arm and hand usually tense up. The reverse, however, is comparatively easy. Try shaking a small can of fruit juice - either real or imaginary - changing from wide to narrow movements and vice versa and note how much easier it is to go from big to small. Usually the solution for changing an old, undesirable vibrato is to stop vibrating completely and take a new, vastly different approach.

As well as a full tone, I look for other pre-vibrato conditions, including those given below. Since we generally learn and understand better when we actually do something. I follow the questions determining these conditions with an 'action' description of what can be done should the response be a negative one. Trying them yourself should soon demonstrate how these ideas can be applied to students.

1. Is the power line from the back completely free and unobstructed, with all of the energy channelled directly through - not from - the arm and hand to the fingerboard?

Action: Sit in the position of a good horse rider, with a straight back, leaning slightly forward. Now place your hands on your legs slightly above the knees. Allow the weight and energy to flow from your back through your arms and hands while your fingers feel strong but remain flexible, Your hands will feel sticky, as though you had dipped them in wet glue. Slowly raise the palm of each hand to form an arch, allowing the energy and weight to flow through the finger-pads to the legs. This is the most desirable form of energy for the cellist to use in both left- and right-hand technique when playing a passage with vibrato. Now transfer this feeling to the fìngerboard and bow stick

2. Is the left thumb free of any kind of tension, not pushing up against the cello's neck?

Action 1: Tap or wiggle the thumb every few seconds to prove that it is not tight.

Action 2: Slide the fingers of the left hand up and down the entire fingerboard in an embryonic form of shifting while using tremolo bowing. This siren-sounding action will be impossible to do if the thumb is pushing up against the neck.

3. Can you feel an imaginary coiled wire spring in each joint of the left arm, hand and fingers? Do the finger-pads feel sticky - creating a feeling of suction between the skin and the fingerboard?

Action: Place a heavy left hand anywhere on the fìngerboard in what you consider to be a good playing position. Ask someone else to tug on your left arm in the same direction as the elbow is pointing or if alone, use your right hand to tug. The fingers on the fìngerboard should straighten, but immediately snap back to the original position when the tugging stops. If the string should fail to remain down during the entire process, change the alignment of the hand and arm and try again. Test it in other places on the fingerboard, or even on a desk or table.

4. Is the energy channelled through the playing finger only? This is the one that determines the pitch and should be the point of balance.

Action: Attach a soft kitchen sponge to your right forearm with a rubber band. Place the right hand on your left shoulder and imagine that the sponge is your fingerboard, Now sink into the sponge with the playing finger while supporting the other fingers so they don't touch the sponge. Let the non-playing fingers feel as energy-less as wet noodles. Now transfer these feelings to a real fingerboard but imagine it is made of rubber.

5. Is there an almost straight line running from the left elbow to the hand?

Action: Fasten a small matchbox filled with rice or dried beans to the back of your left hand with two rubber bands or some sticky tape. Now shake it in the direction of the line formed by the base knuckles of the fingers and find out which position makes the loudest rattling noise. Note that when this loudest noise is produced, there is an almost straight line running from your elbow to the hand except for a very slight downward curve in the wrist. It's like a highway. Now allow your wrist to form a hill, then a valley and a detour in the highway by changing the angle of your hand and arm. Listen to the effect. These last three positions must be avoided because they restrict the motion and the sound of the rattling beans, Thus, when playing, the vibrato will almost disappear.

6. Does the left elbow feel as if it is floating?
Action: Imagine that your left elbow is floating in water with a different water level for each string, the A string being the lowest. Allow the water to support the elbow.

7. Still with the matchbox on the hand, does the fat inside the upper arm jiggle like jelly when the box is shaken?
Action: Tie a shiny Christmas decoration around the upper arm and watch it sparkle as it moves in a different direction to your hand. A slight motion in this part of the arm is a necessary ingredient in a tension-free vibrato.

THE VIBRATO MOTION
Let us look now at the vibrato motion itself. Among modern cellists the most prevalent style is the eraser-type in the hand and arm (the hand and arm move as if rubbing out a mistake). It allows a great variety in both speed and width, and with developed skills we can continue to vibrate between notes as we change fingers, strings and/or positions. The reason the finger does not smear up and down the string while the hand uses the erasing motion is because of the imaginary coil springs, the sticky wet glue and a very flexible first joint – the one nearest the fingernail. The arm, hand and finger can enjoy moving freely while the pad of the finger rocks securely on a spot on the string and fingerboard. To help the vibrato match the ideal imagined sound, the weight flowing through the finger-pad can be adjusted.

Before the student attempts to use vibrato in successive notes, I recommend practising only long, beautiful, isolated notes (with full tone, of course) surrounded by pauses until the vibrato is well established. Inviting someone else to execute the bowing while the player concentrates on the left hand can be a big help.

Connecting notes with vibrato is one of the most important skills to develop in order to mould beautiful phrases. Generous use of the little matchboxes can be a great help here. Somehow our ears do not always notice if we stop vibrating on certain fingers but, if we play a melody with an accompaniment of the rattling beans or rice, we instantly notice when our percussion section stops working.

Another valuable tool is a very long toothpick with streamers of shiny paper, designed primarily to decorate cocktails or ice cream, attached to the back of the hand. Watching its shimmer while playing is a foolproof way of discovering gaps in the vibrato that can destroy the flow of a phrase.

EXPERIENCED SHAKERS
The principal difference between vibrato and everyday activities such as waving, brushing teeth, scrubbing and other balanced motions is that a beautiful vibrato is constantly refereed by the mental ear. Also involved is a delicate balance between and weight as well as the balance and speed of the motion itself. If the resulting tone does not satisfy us, what a difference one or two changes can make, We can usually find a more beautiful tone and an attractive speed of the vibrato by changing any of the following ingredients: the part of the finger-pad making contact with the string, the shape of the playing finger, the slant of the fingers in relation to the strings, the alignment of the hand and arm, the flexibility of each joint, the elevation of the hand, or even the spacing and height of the supporting fingers.

This article was first published in The Strad’s September 1999 issue.