Explore what the 2022-23 Tianjin Juilliard Season has in store 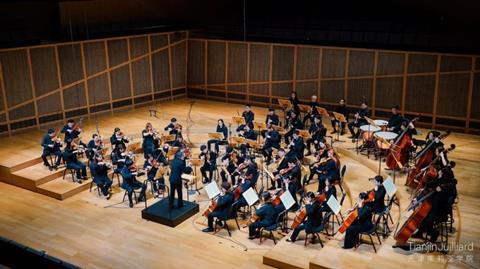 The Tianjin Juilliard Orchestra is the school’s largest student performing ensemble comprised of students from the Graduate Studies program majoring in instrumental and orchestral studies, and instrumental and chamber music studies. Two student soloists will be selected by an annual competition this November for concerto performances with the Tianjin Juilliard Orchestra in the spring. In February, Juilliard students from New York and Tianjin campuses will come together in a live collaboration to perform Terry Riley’s landmark work, In C.

“In this new season, we hope to inspire audiences through our exciting programming opening the season with orchestral performances led by Maestro Lam, presenting new chamber music masterpieces, curating ensemble concerts showcasing our faculty’s versatility, the return of Festival Connect, and co-presented community engagement projects with our alumni,” said Wei He, CEO and artistic director.

Steeped in The Juilliard School’s tradition of excellence in music education, Tianjin Juilliard continues to innovate and evolve, striving to provide diverse performing opportunities to all of our students as they showcase their artistry and perform side-by-side with our distinguished faculty and visiting artists. These performances along with the concerto competition prepare our students to flourish professionally. The School has created a wealth of opportunities both on and off campus for current students and alumni.

Wei He, CEO and artistic director

“This fall, we will co-present a series of public concerts with a newly formed ensemble comprised of our outstanding alums, to bring Juilliard’s renowned programming of the highest artistic level to communities and audiences in Tianjin and beyond. We invite audiences to experience the future of the performing arts through this season’s performances showcasing our students from Graduate Studies, Pre-College, and Public Education.”

The Tianjin Juilliard Ensemble, the School’s resident faculty ensemble, returns with an all-French program on October 21, featuring works such as Louise Farrenc’s Sextet in C Minor and César Franck’s Piano Quintet in F Minor. The six concerts showcase the diversity of the faculty ensemble’s programming, including an exciting evening of vocal chamber music, featuring Respighi’s Il tramonto, Ravel’s Chansons  madécasses, and Vaughn Williams’ On Wenlock Edge  on Friday, November 11. Other performances include the premiere of a new commission by Yiwen Shen, on a concert with a “Bagatelles and Tangos” theme on Friday, March 31 2023, and a concert featuring Baroque concerti on Friday, April 14 2023, among others.

The school’s flagship music festival, Festival Connect, will take place in January 2023 and culminate in a performance by the Tianjin Juilliard Orchestra on January 15. This year’s festival will celebrate Igor Stravinsky (1882 – 1971) and two living composers, Joan Tower from the United States and Guo Wenjing from China. The program will feature Joan Tower’s Grammy-winning Made in America, Guo Wenjing’s Zhudi Concerto No. 2, “Ye Huo”, with Chinese bamboo flute master Tang Junqiao as soloist, and Stravinsky’s The Firebird: Suite on Sunday, January 15, at 3:00pm in the Tianjin Juilliard Concert Hall.

A Distinguished Artists series will be launched in November. This new series features performances by the Chang Jing Xian Ensemble, the Shanghai Quartet, as well as classical guitarist Xuefei Yang and additional renowned artists will be announced.

Fanfare for a New Theatre  for 2 Trumpets

Suite Italienne  from Pulcinella  for Cello and Piano

Conductor to be announced

Conductor to be announced

A selection of Bagatelles from BEETHOVEN, BARTÓK, and BOLCOM for Solo Piano