According to an Association of British Orchestras report, published today, British orchestras faced a five per cent drop in their total income from 2013 to 2016. 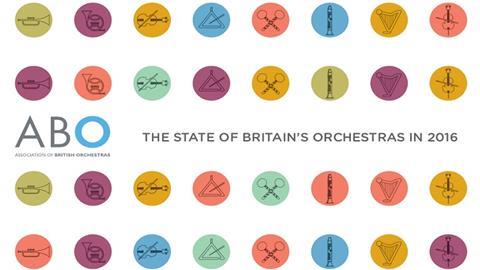 The UK's top orchestras are reaching larger numbers of people through concerts and youth engagement initiatives but are losing income, according to a report published today by the Association of British Orchestras (ABO).

Entitled The State of Britain’s Orchestras in 2016, the survey reveals that the nation’s leading orchestras delivered more than 4,000 concerts for almost 5m people last year. Britain's orchestra's gave seven per cent more performances than in 2013, visited 42 foreign countries compared to 35 in that year, and reached almost 900,000 children and young people - a 35 per cent increase on 2013.

However, orchestras earned less money, and this, combined with public funding cuts of up to eleven per cent, has resulted in a five per cent drop in their total income.

'Orchestras have innovated to achieve bigger audiences and engage more young people and they should be proud of these successes,' said ABO director Mark Pemberton. 'However, the survey masks a greater reality. These larger audiences do not bring in more money and, if anything, actually increase losses. Many of the achievements have been fuelled by audience development initiatives such as discounted ticketing, free concerts and fixed fee performances at open air events. These have left orchestras suffering a double whammy – a decline in earned income alongside significant cuts in public funding. The message is simple. Orchestras cannot continue doing 'more for less'.'

The survey included 84 per cent of the ABO's 61 members.