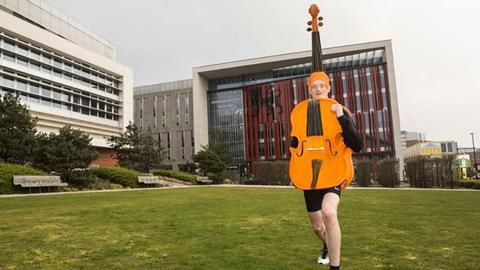 A student from Birmingham Conservatoire, UK is to attempt to break the Guinness World Record for running the fastest half marathon dressed as a musical instrument.

Alistair Rutherford will wear a custom-made viola costume made from lightweight Plastazote foam by designer Brian D Hanlon to run the Liverpool Half Marathon on Sunday 2 April 2017.

The viola student hopes to raise funds for ARCO - a collaboration between Birmingham’s String Department and the Cape Gate MIAGI Centre for Music in Soweto, South Africa. The project has seen 24 South African strings students participate in weekly instrumental Skype lessons, given by academics, current students and alumni of Birmingham Conservatoire. Rutherford has previously run the distance of the South African coastline to raise funds for the project.

'Birmingham Conservatoire is full of admiration for Alistair’s adventurous and rather 'off centre' project,' said head of strings Louise Lansdown. 'We are currently enjoying daily updates, including photos and videos of Alistair’s training sessions with his brand new enlarged viola! Alistair and his viola can be seen running around Edgbaston Reservoir most mornings around 7am – a sight not to be missed.'

The current Guinness World record was set by Rakshith Shetty, who ran the SBI Bengaluru Midnight Marathon in India while dressed as a guitar on 5 December 2015.