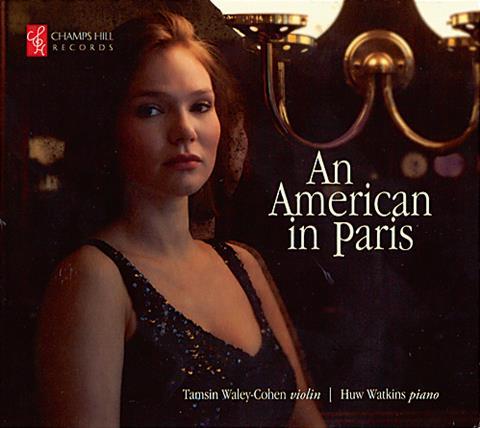 Tamsin Waley-Cohen celebrates her joint American and European heritage on this CD, most obviously with the title track, of which more later. She opens with Poulenc’s Sonata, laying out its vivid contrasts with gusto. In the outer movements, muscular, gritty playing is offset by silky seduction, and she weaves her way through the Intermezzo second movement with a seamless, eloquent legato, intimate and introspective. The tragic last-movement coda, played mostly in a whisper, has a wonderful sense of suspended time.

Ives’s Decoration Day, originally from his Holidays Symphony, opens as a reverie before picking up into jaunty dance, played with great panache. In An American in Paris, Waley-Cohen transmutes Gershwin’s snazzy street life into a curiously polite, drawing-room affair, but with nicely idiomatic melodic inflections and swinging dances.

The recording is close and resonant, particularly apparent in the spare first movement of Ravel’s Violin Sonata, which she plays with an etiolated, wispy sound. In the ‘Blues’ second movement she resists the temptation to switch into Grappelli mode, but the violin is rather too much in front of the piano – played by the excellent Huw Watkins. She is certainly jazzy in Porgy and Bess, syncopating and sliding her way through ‘A Woman Is a Sometime Thing’ and sounding positively immoral in ‘It Ain’t Necessarily So’ before the fireworks kick in.