Achron: Music for Violin and Piano 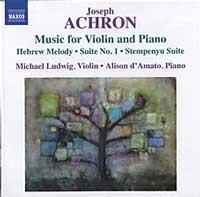 Michael Ludwig opens with Joseph Achron’s best-known work, his Hebrew Melody of 1911, made famous by the composer’s friend Jascha Heifetz. His playing is passionate and strong, with emotional intensity and a rich vibrato. Achron was himself a virtuoso violinist, and some of the pieces here pose formidable technical challenges, which Ludwig surmounts with flair. The Melody was the first of the works he wrote using Jewish styles, and a number of the items on this CD pre-date it. Les sylphides, from 1905, is a dancing flibbertigibbet piece, played with beguiling lightness and personality.

Ludwig has persuasive lyrical gifts, and Achron’s many extended melodies are beautifully, mellifluously played. In the Dance Improvisation on a Hebrew Folk Theme Ludwig is full of high spirits, even as the writing moves into Paganini-like virtuoso exuberance. The most substantial work on the disc is the Suite no.1 ‘en style ancien’ (1906), written in Baroque dance forms. Pianist Alison d’Amato, whose excellent playing is a constant feature, shines especially here, bubbling away in the Gavotte around Ludwig’s poised playing and being a nimble partner in the delightful final Gigue. Ludwig brings sprightly klezmer style to the Stempenyu Suite (1930) before bringing the disc to a satisfying conclusion with the exquisitely played Berceuse of 1906. The recording is close-in with some ambient warmth.