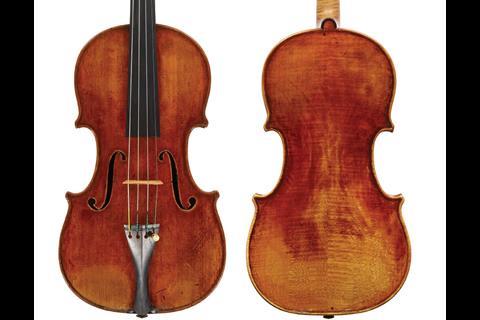 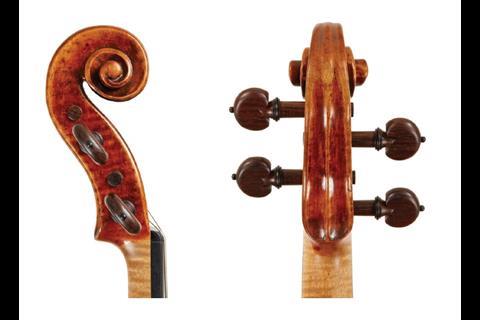 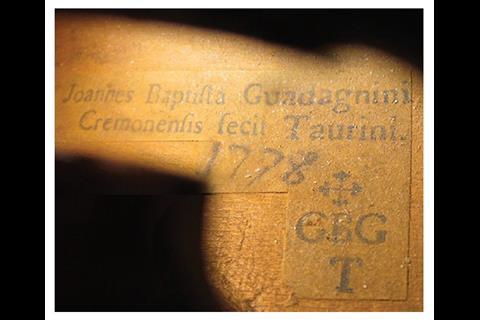 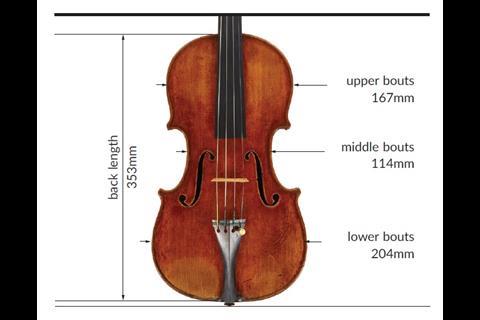 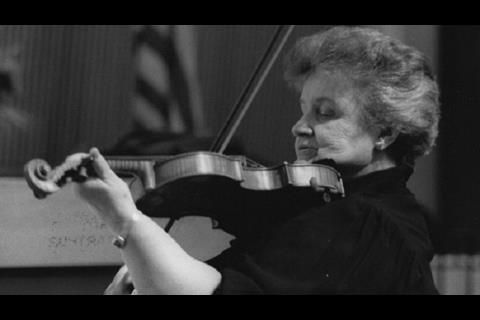 The instrument in the hands Dorothy DeLay

Giovanni Battista Guadagnini was propelled on his peripatetic career by the fate of his various patrons and supporters. Moving to Piacenza from his birthplace nearby, he became associated in that city with two musicians, the brothers Paolo and Carlo Ferrari. He followed them to Milan in 1749, then in 1759 to Parma (possibly by way of Cremona) where he worked for the Bourbon duke, Don Felipe. Following the duke’s death, Guadagnini moved to Turin in 1771, where he worked for the eminent collector and trader Count Cozio di Salabue.

His style of work changed considerably with each move, from the slightly flattened yellow- and red-varnished Piacenza instruments with quite slender f-holes, to what was his most expansive period in Milan, where all of the elements of his characteristic style reached their maximum expression: flamboyant, widely cut scrolls dotted around the eye with prominent layout marks and beautiful rich red varnish.

In Parma things became even more exaggerated, as he developed elongated soundholes with his trademark oval lower eyes, high archings and usually a slightly paler varnish. In Turin he entered into a contract with Cozio, who tried to guide him away from these personal touches towards a more standardised Stradivarian model.

The violin famously owned and played by Dorothy DeLay comes from 1778, seven years after his move to Turin. DeLay purchased it from Rembert Wurlitzer of New York in 1969, and it is a very fine representative of the maker’s Turin period. It was sold by Tarisio in October 2013 for almost $1.4m, still a world record for a Guadagnini violin.

The wood is a quite modest selection: the back is lightly flamed, the ribs having the deep, narrow flame of native oppio maple.

This violin demonstrates two points about Guadagnini’s work that remained consistent throughout his career. His purfling shows distinctive long pores in the white core, and the corners of the plates are worked thinner than the bout edges – the reverse of usual Cremonese working, where the corners are left slightly thick and flare upwards from the edge.

The most obvious effect of Cozio’s influence can be seen in the f-holes, which have lost the oval lower eyes, and gained Stradivari-like fluting in the wings. The wings themselves are still very broad with almost ‘del Gesù’-like points, in fact very reminiscent of Francesco Stradivari’s work. The arching is much lower and the whole impression is very similar to a 1730 period Stradivari.

The scroll too is restrained, the prick marks barely detectably around the eye, and the proportions more conventional. In later Turin work Guadagnini even adopted the blackened scroll chamfer introduced by Stradivari, but there is no sign of it on this example.

The intense red varnish is almost the equal of his best Milanese work, but is slightly thinner in texture and close to the well-rubbed wood surface.