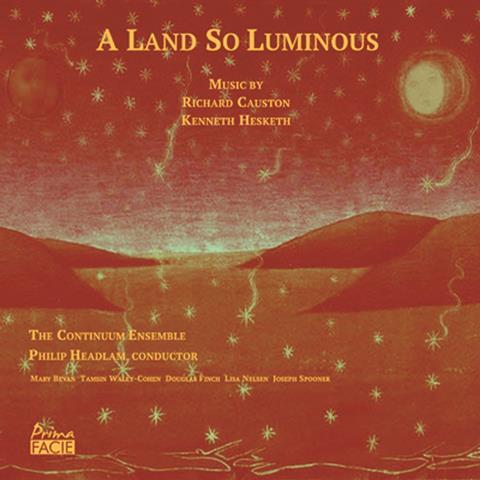 British contemporary composers Kenneth Hesketh and Richard Causton make for an illuminating pairing on this well-filled disc from the Continuum Ensemble. Both share a liking for dramatic gesture, even if Hesketh’s music feels larger-scale and more discursive, Causton’s smaller, tighter and more acute.

The disc’s string focus lies in Hesketh’s pieces, however. Violinist Tamsin Waley-Cohen gives a poised, considered account of his Cyrano de Bergerac-inspired A Land So Luminous for violin and piano, although she sounds more at home with a voluptuous, supple tone in the work’s quieter, more dreamy passages than in its energetic opening. There’s no lack of bite, however, in violinist Marcus Barcham Stevens’s playing in the vibrant, assertive trio Cautionary Tales – he enters fully into the deranged, frenzied grotesquerie of the closing movement, for example. Hesketh’s ‘imagined shamanic ritual’ IMMH asks a lot of its solo cello perfomer, demanding not only intense focus in its slowly unfolding melodic line, but also percussion on the cello body and chant-like singing. Joseph Spooner gives a wonderfully persuasive account, however, full of remarkable passion and conviction.

Highlights elsewhere include a thrillingly vivid account of Causton’s energetic ensemble work Rituals of Hunting and Blooding. Unfortunately, recorded sound is far less convincing: it varies enormously from piece to piece, with IMMH so closely recorded that it veers dangerously close to distortion, while A Land So Luminous sounds veiled, recessed and dominated by the piano.