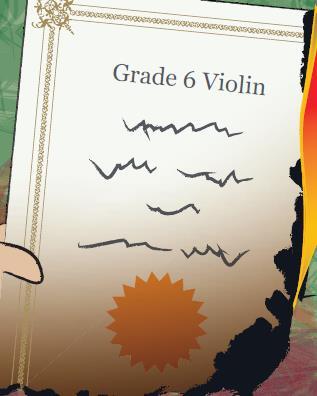 There’s a story about a boy who has just finished his instrumental exam and begs to know whether he has passed. Unfortunately, replies the examiner, he’s not allowed to say, but the results will be sent out soon. The child pleads so urgently that he can only relent: the young student has indeed been successful. But why, the examiner is curious, was it so important to know there and then? ’My mum said that if I passed, she would let me give up.’

When it comes to learning an instrument, in the UK anyway, it has become more or less accepted that musically minded children will take exams, perhaps on more than one instrument. The trouble is, since any examination is an intervention in a student’s learning, not merely an observation of it, the mark awarded is bound to reflect a student’s ability to perform under exam conditions. This can be problematic if there’s a lot riding on the result: access to continued teaching, say, or to schooling, college education or wherever else using music exam scores to tell people apart.

Clearly, some students like the exam regime, finding it a reassuring way to make their way to proficiency and beyond. But not all do: I scraped through the UK’s top examination level in piano, an experience that led me to give up (sound familiar?). But I never took a single exam on the instrument I now play professionally: the viola.

So why force the ordeal - taking but also preparing for exams - on those who dislike them? Because performing is stressful, so they’d better get used to it? But performing isn’t always stressful, although it is more likely to be if there’s something at stake. Because practical music exams prepare you for auditions? That’s a very specific aim around which to design an entire pedagogical method. Character building? It depends what kind of character you want to build.

Passing an exam may give a student a sense of achievement - the achievement of passing an exam. Yet music provides plenty of ways to find fulfilment and validation: by performing in public; by setting your own challenges; by devising projects; by enjoying the camaraderie that musical collaboration can offer; by seeing your work written about, discussed, valued and applauded.

Exams may appear to indicate a student’s level of attainment, but what exactly is being assessed? How much can an exam reveal about the student’s deeper engagement with music, the extent to which it has taken root but which may take years to bear fruit? And how much can it do to damage it? What can it say about a young player’s ability to communicate, bearing in mind that exams invariably take place in a room with an audience of one, in a nervy atmosphere when they’re probably not feeling well? It’s more like visiting the doctor

One instrumental teacher remarked to me that her students seemed so inculcated with the idea that exams are the key to getting on in life that playing the cello had little other purpose - without the certificate, what’s the point? Clearly, teachers have a role to play in challenging that kind of view by providing as tailored a learning experience as possible, choosing the most appropriate pieces for a student to work on, and by dipping out of the syllabus too (there’s a danger that the fixation on passing discourages teachers from experimenting with a wider repertoire). But also by judging when not to enter a student for an exam if there’s nothing to be gained.

That may not be so easy to explain to a parent or music department, eager that students should have something to show for all those music lessons, something for their junior CVs. But why not devote more of the substantial resources that go into the exam business - money, manpower and marketing - into promoting alternative models? Why not set up an infrastructure giving multiple, varied opportunities for students to perform in meaningful contexts and to receive feedback and assurance from a range of sources instead of loading all of that on to one teacher, one examiner, one set of narrow test results and one restrictive test scenario? After all, some things really are worth giving up.