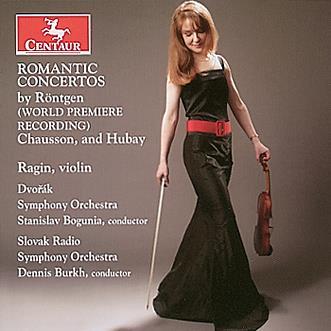 There is a passionate zeal and imperativeness about these recordings that took me back to my early days as a collector, when I used to pick all kinds of obscurities on the Vox label (then distributed in the UK as Turnabout/Decca) played by the likes of Ruggiero Ricci and Suzanne Lautenbacher (a hugely underrated Szeryng pupil). Just like those 1960s and 70s delights and in total contrast to the glacial perfection so often encountered on disc nowadays, Ragin Wenk-Wolff goes into interpretative meltdown here, soaring aloft in the Röntgen and Hubay concertos with heart-warming sincerity. Perfection-seekers may notice the very occasional intonational slip en route, and when the pyrotechnics begin to stack up she lacks the sleight-of-hand ease of a Rabin or Perlman to get herself out of trouble. Yet such is her scorching commitment (and that of her accompanists) that any passing infelicities are quickly forgotten in context.

As to the two rarities included here, on paper the concerto by Julius Röntgen (1855–1932) is sustained largely by generic ordinariness – it’s melodically less memorable than, say, Bruch no.3 or the Conus E minor, although it is saved by a lush harmonic idiom reminiscent in places of early Scriabin. The Hubay possesses marginally the stronger profile, although there is barely one truly memorable idea on the way – it’s the kind of music that has one thinking how much better the likes of Sarasate and Wieniawski handled similar material. Yet performed like this, enhanced by physically imposing sound, you might almost be persuaded it was a lost masterpiece.