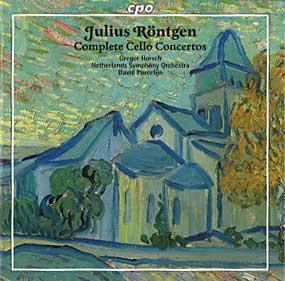 Julius Röntgen (1855–1932), all but forgotten today, was a key player in German and Dutch musical life in his long and productive career. Although it might defy even a crusading label like CPO to release all of his 650 works, this, the tenth volume of its Röntgen edition, does comprise the complete concertos for one of his great loves, the cello.

Close cousin to cellist Julius Klengel, and friend of Casals, with whom he played in a piano trio with Carl Flesch, Röntgen composed for the cello over a span of 60 years. You can sense him revelling in its sound in the free solo passages that start two of the three concertos here, played in a heroic, Romantic style by soloist Gregor Horsch, principal cellist with the Royal Concertgebouw Orchestra for the past 16 years.

Horsch is appropriately closely recorded in these concertos, where at times the orchestra is in little more than an accompanying role. He makes the most of often uninspiring material, playing Röntgen’s generous melodies with an exceptionally flowing style and characterising the jaunty spiccato cello theme over pizzicato strings in the Allegretto scherzando of no.2 with admirable good humour.

The orchestral sound is rather monochrome, with little definition between the individual orchestral sections.