Staccato - one of the most controversial elements of right-hand technique 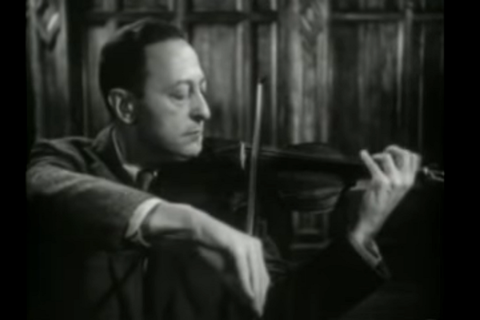 Staccato is one of the most controversial elements of right-hand technique. Through the ages performers and pedagogues have tried to evaluate its significance and the best ways of acquiring it, coming up with diverse and conflicting views. Basically, it is a succession of short, sharply articulated notes in one bow on the string, containing two elements: an accent at the beginning of the note and the stopping of the bow at the end of it. The following chart shows how these elements apply to different bowings, including a seldom-used staccato which Capet describes as ‘simple staccato’:

There are two main kinds of staccato: firm and brilliant, which Demetrius Dounis describes as ‘different processes’. Firm staccato has been given different names: controlled (George Hart); martelé, slow or heavy (Dounis); honest (Jascha Heifetz); rhythmic (Ivan Galamian); mordant (Lucien Capet); Spohr (Carl Flesch) or solid (Percival Hodgson). Firm staccato is a series of martelé notes in one bow. Different authorities put different maximum speeds on what one can achieve: Flesch has the speed limit for semiquavers as ♩ = 66, Harold Berkley as ♩ = 88.

Brilliant staccato also has many names: tense, rapid (Dounis), fast (Galamian), cramp (Konstantin Mostras), nervous (Samuel Applebaum) or Wieniawski (Flesch). It is used for higher speeds, where control is to some degree sacrificed to the gain in speed. Approaches are usually quite individual and the mechanics are described variously:

‘[Tense] the entire arm from shoulder to finger tips.’ This induces trembling ‘and this trembling feeling is imparted to the bow.’ (Dounis)

‘[A] rolling movement of the forearm.’ (Tossy Spivakovsky)

‘It is a stiff arm stroke exclusively.’ (Heifetz)

‘The rotary motion of the forearm.’ (Harold Berkley)

‘[Staccato is] played with the entire arm, not the wrist. The number of pulsations in the upper arm corresponds with the number of notes contained in the staccato passage.’ (Wieniawski)

The most complicated aspects of both types of staccato are the application and release of pressure and the indefinable interplay between the resistance of the string and the elasticity of the bow. As far as pressure is concerned Galamian and Berkley are in complete agreement: Berkley describes how in staccato ‘a certain amount of the pressure must remain on the string even when the bow is still’, while according to Galamian, ‘In the slow staccato (based on martelé) the pressure is released between each stroke, but in the fast, nervous staccato, the pressure is constant.’

Understanding the mechanics of staccato can be helped by observing the path of the right hand during play: 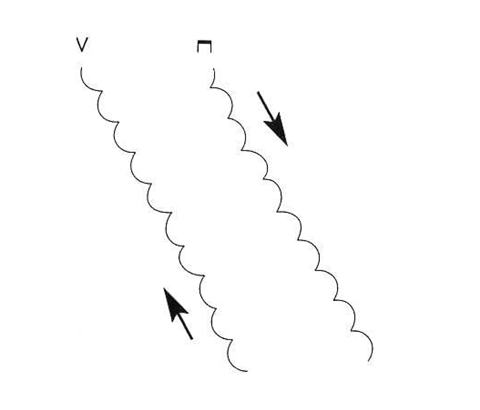 Hodgson, who produced the graph, explains that it ‘shows how the motion of the hand is affected by the intermittent pressure of the bow against the string.’ This movement, called by Applebaum ‘the scooping motion of the hand’, is more pronounced in firm than in brilliant staccato. Indeed, Mostras is of the opinion that if used in brilliant staccato, this ‘pecking’ motion prevents sharpness and clarity and should be substituted by a small, horizontal movement of the wrist. This indicates the importance of finding the right ratio between the vertical and horizontal components of the curving motion that accounts for the highly individual approaches to staccato.

Some authorities emphasise the special attention that should be paid to specific fingers of the right hand in this bowing. Mostras believes that the third finger should assist in small motions of the hand. This idea is reminiscent of Capet’s that the third finger is ‘a supervisor which can... augment the decisiveness of the bow.’ According to Heifetz, ‘It will help if the little finger remains on the bow, as on the up stroke the little finger acts as the stabiliser. For the down bow stroke the stabilising effect of the little finger is not required...it is best to come off the bow.’

The value of both types of staccato to right-hand technique is distinctly different. Many violinists agree on the importance of practising firm staccato, including Sydney Harth and Ilona Feher: Harth’s sentiment that ‘it is more valuable to work on a perfectly controlled staccato than the so-called nervous staccato’ is echoed by Feher, who says that ‘controlled staccato is much more useful.’ According to some, brilliant staccato can even have negative effects and should be practised with great care. Galamian warns that ‘the tense staccato should be practised with caution. The time spent in uninterrupted practice should be limited.’

Yehudi Menuhin agrees: ‘It should not be practised too long at any one time.’ This sort of staccato should be practised ‘at full speed only’ (Heifetz) and ‘can never be accomplished by practising it slowly.’ (Dounis)

Start by practising simple staccato and portato and the transition to these from legato. Constantly observe the accents at the beginning of each note and the stopping of the bow at the end. To cultivate the start attack play martelé in all parts of the bow and experiment with the quick transfer from one part of the bow to another.

‘After each note the bow should be lifted from the string and pass over to the new part in the air - about half an inch above the strings - and as quickly as possible’ (Dounis). The possibilities are endless: a few are given in exercise 1 (above) after Dounis, based on Kreutzer’s Etude no.5, where F is to be played at the frog, M the middle of the bow and P, the point.

Experiment with playing small groups of staccato notes in different groupings in various parts of the bow (exercise 2, Dounis).

As a modification of this exercise, play long series of staccato notes in different rhythmic combinations (Otakar Ševčík, Dounis). Exercise 3 shows a few of the possible combinations.

According to Albert Spalding, on the route to a perfect staccato ‘there are two stumbling blocks: the change of strings and the change of position.’ He advises practising staccato in scales and broken thirds. Ševčík’s idea of practising broken chords with a combination of legato and staccato (exercise 4) is helpful not only for staccato but also for sensitivity in cantilena. As you change from portato to staccato the emphasis shifts from the horizontal to the vertical component of the bow pressure.

As for acquiring brilliant staccato, violin literature and folklore abound with advice. Some methods are bizarre and some almost require a belief in a ‘divine gift’ or ‘occult power’ (Dounis). For instance, Flesch suggests holding the bow with only the first finger. If this doesn’t help, he recommends creating complete stiffness in the upper arm, cramping all the muscles.

The most reliable way is described and taught by Applebaum, Dannemann, Robert Gerle and Vaclav Huml: play tremolo at the point of the bow and than start moving the bow towards the frog. The movement of the arm eliminates the downward component of the tremolo leaving only short up-bow strokes to be heard.

While the two staccatos are different, practising passages which are to be played with brilliant staccato by way of controlled staccato can improve the precision and control of both. Furthermore, practising firm staccato on both up and down bows is an excellent way of improving general bow technique. If all else fails, Josef Gingold once described Eugène Ysaÿe’s teaching method for staccato: ‘He asked me to put the bow on the string, shouted at me to tighten the upper arm and then roared "Play!" He scared it out of me.’