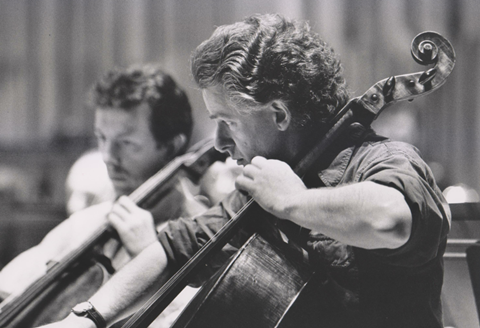 The arpeggione is the Cinderella of the stringed instrument family. Fortunately the glass slipper it left behind, in the form of Schubert’s Arpeggione Sonata, has remained a rare gem in the repertoire of cellists and viola players alike, both of whom are eager to claim it as their own. Indeed, the greater range and sonority of the cello and viola do more justice to the song-like character of the sublime music that Schubert in 1824 so willingly penned for this ‘test-tube’ instrument, as a commission from his arpeggione virtuoso friend Vincenz Schuster.

Visually the arpeggione, invented around 1823, is a hybrid of the viola and the cello combined uneasily with attributes of the guitar and viola da gamba. It is fretted but bowed, six-stringed, and it has a fingerboard length halfway between that of the viola and the cello. There are examples of cornerless violins by Stradivari to which the design bears some resemblance, such as that played at one time by Joshua Bell, but the fact that no other significant music was composed for it only serves to underline its lack of attraction to players and composers. Rather like a genetic mutation that has proved to be infertile, it has for the most part been consigned to the shelves of the museum. Those brave souls who have experimented with both making and playing it are to be lauded for their advocacy, but time and natural selection have rather discredited their efforts.

In fact much of the music of this period has been forgotten, perhaps because – as was typical of the 19th-century Viennese Biedermeier style – it did not challenge the listener. Many of Schubert’s works capture an essential element of the zeitgeist ‘domestic’ music of elegance from the time, but while his writing is not particularly idiomatically suited to stringed instruments, this sonata, like his piano trios, is a prime example of Biedermeier chamber music that elevates the genre to a different level. The technical demands of the Arpeggione Sonata are considerable, but the piece has a touching simplicity and an affectionate heart that should never be far from one’s mind in the matter of interpretation. 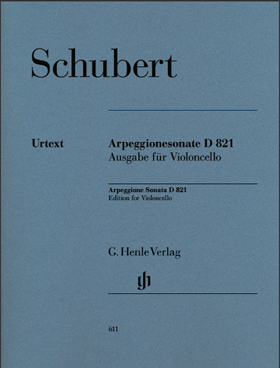 Beware the player who thinks this music is as easily executed as it should so mellifluously sound! It is one of the most challenging pieces for any string player, and its combinations of song-like melodies and virtuosic writing, graceful arching phrases and florid passagework, demand a high degree of skill and maturity. Striking the right balance between these aspects gives the music both its soulfulness and its fleet-footed character – characteristics it shares with the Schumann Concerto, which is also notorious for its high-lying passages and parlando melodic writing.

Schubert the great lieder writer treats the opening of this movement no differently from the telling of a song narrative, with an introduction in the piano part that immediately gives the clue to the character of the ensuing music. The mood is introverted yet full of expectation, and it lays down the kernel of the theme to come. I often wonder if Brahms had this at the back of his mind when writing the E minor Cello Sonata, the first bar of which shares the same rhythmic motif and the same sense of something withheld before it starts to explore the thematic possibilities inherent in the opening.

Once the cello takes centre stage, the piano assumes a largely accompanimental role, supporting and occasionally contributing an ‘aside’ to the cello part. This means that the cello plays more or less continuously throughout the movement, and so controlled variety of articulation and tone are paramount. The cello’s opening theme is long and we need to be able to spin the melody like unrolling a scroll of parchment that reveals itself as it unfolds. Consider the direction of each part of this phrase in relation to the whole, so that the overall arch of the first twelve bars is maintained, rather than being ‘chopped up’ into the smaller segments of the theme. The execution of this and other lyrical passages in the sonata relies on a son filé bow technique: in other words, before starting we need to have an awareness of the whole length of the phrase to come, and to match our sound and colour to the affectionate character of the music.

A major challenge throughout the sonata is the dexterity and athleticism required of the left hand. This is not the strength and stamina of the shot-putter, but more the fine-tuned balance and precision of the high-wire artist. In negotiating the faster running passages try to keep your eye (and ear) on the ‘mid’ or ‘far’ objective of the phrase, rather than individual notes. Imagine that you are skiing: you need to keep your focus on the whole downward slope, rather than just on your feet and the direction of your skis.

The fact that the sonata’s arpeggione tessitura lies rather high for the cello means that every performer can approach this piece with a degree of choice as far as some of the register goes. This gives us the chance to put a personal stamp on it in a way that few other works in the standard repertoire do. There is no edition that can be taken as definitive, and the Henle version included here points out the passages that differ from the original arpeggione part.

The fingerings that we use should also be a personal decision, and there are many possible alternatives within the first twelve bars alone. The choices that you make will be one way you can make your own stamp on the music. Jacqueline du Pré was a master of what I would term ‘emotive’ fingering and I suggest that anyone who wants a masterclass in this should watch her televised Elgar Concerto in Christopher Nupen’s film! Some of the incredible inflexion in her playing came from very unorthodox ideas, which she used to convey her own personal feelings for the music.

My main criterion is to find fingerings that support legato transitions between positions where possible, and which, with the use of a few subtle glissandos between notes, underline the vocal quality of the writing. By way of illustration, consider the important falling minor 6ths (for example in bar 12) and rising major 6ths (bar 14) that occur throughout this movement. Traditionally the rising 6th is described as an interval of yearning (think of the rising minor 6th in Wagner’s Tristan theme). In bar 14 Schubert writes a major 6th that, by following on from the falling minor version two bars earlier, feels like a positive moment in what has, to that point, been a rather melancholy theme. For that reason I would suggest staying on the A string for the bar 14 shift from D to B and playing a subtle and almost imperceptible slide, rather than opting for the safer crossing to the B from a D on the D string. Another example is in bar 67: here the falling E flat to D can benefit from the use of the same finger (3), to give a more poignant vocal feeling than a ‘clean’ alternative of 3–2. There are many such places in this piece.

Debussy, in writing about the bowing in his own Cello Sonata, told his publisher that cellists should find their own ‘best’ solutions. It seems to me that here, too, in music of this fluidity, we should explore all possibilities and use whatever bowing is necessary to convey the idea of an expressive vocal line – just as singers may choose to breathe in different places.

It is also important to consider how to vary our articulation. For example, for the contrasting, virtuosic passagework in the second subject (from bar 32) and for the latter part of the exposition, we need agility in both hands. In these passages I try to make my left-hand finger pads alive to the sensation of touch, with very little pressure. In contrast, when I am drawing a really legato line, I try to find a tenuto feeling in my fingers, with the pads on the strings.

Back to the beginning

When I was a child the recording of the Arpeggione Sonata that really fired my imagination was the one by Mstislav Rostropovich and Benjamin Britten – not least because of Britten’s wonderful piano playing. When I first heard it on the radio I rushed to buy the music, but when I saw it I was dismayed by its difficulty. I’m glad that I didn’t attempt to play it until I was an adult – or even until after I had finished two years’ study with Rostropovich in Moscow. During those years I never heard any of the other students playing it – it did not seem to be a priority in the core repertoire at that time. Thankfully I had the good sense to put it to one side, to wait for the time when I felt I could take it in my stride.