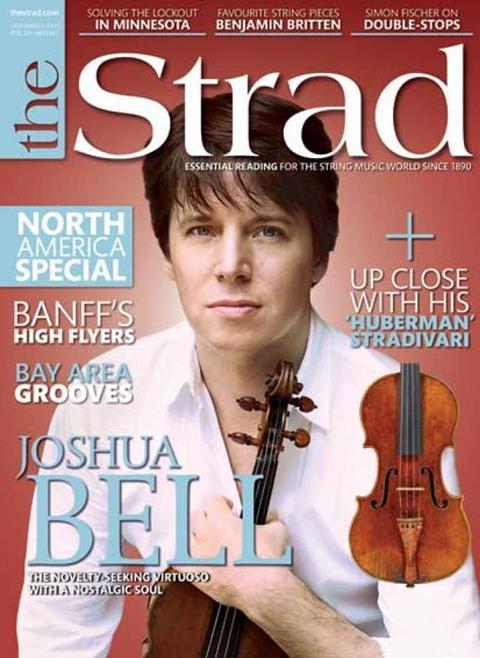 The November issue of The Strad is on sale now. Our annual North America issue features American violinist Joshua Bell discussing his new multi-genre album, his role as musical director of the Academy of St Martin in the Fields, and his relationship with his 1713 ‘Huberman’ Stradivari violin – a tale of good luck, coincidence and near heartache. Bell's 1713 ‘Huberman’ Stradivari is the focus of an in-depth analysis article by Sam Zygmuntowicz.

Also this issue, Tim Woodall explores San Francisco to find out how the city has become a hotbed of innovative chamber music; Anthony Barnett pays tribute to the multifarious Harry Lookofsky, born 100 years ago, who worked with everyone from Toscanini to Quincy Jones; and David Kettle examines the string music of Benjamin Britten and asks why musicians rate it as among the greatest of the 20th century.

Plus, Canadian luthier Raymond Schryer and cellist Raphael Weinroth-Brown on making an instrument based on a Rugeri model; Harriet Smith's report from the Banff International String Quartet Competition, and Tim Kliphuis’ guide to playing like Stéphane Grappelli.

FREE POSTER: Antonio Stradivari 'Huberman' violin 1713– complimentary to subscribers. Subscribe before 30 October to get the November issue and your free 'Huberman' Stradivari poster.