Instrumental teachers should discourage competition among their students

It's worth managing pressures in the early stages of a musician's development, argues Naomi Yandell 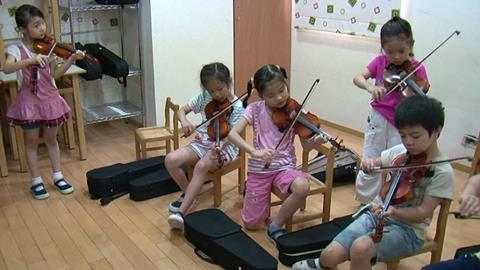 Competition, to a greater or lesser extent, is hardwired into us all. As I walked into the playground the other morning a child’s voice cut through my pre-coffee state. ‘See what I can do!’ he shouted triumphantly from the pinnacle of the climbing frame, looking down at another boy who was summoning up the courage to climb to the middle level.

Competition may be harnessed as a powerful motor towards aspiration and achievement or, if unfettered, can become a destructive element leading to disillusionment and fear of failure.

Student to student, parent to parent, teacher to teacher, competitive stresses are never far away from the teaching studio and are fraught with potential danger. Which teacher hasn’t overheard students (or parents) asking the following ‘What book are you on?’ ‘How much practice do you do?’ ‘What grade are you on?’ or ‘What mark did you get?’ Has any parent not been secretly (or not so secretly) chuffed when their child got a higher mark in an exam or competitive festival than another? And which teacher, hand on heart, hasn’t held onto a star student for just a bit longer than they should have done to bask in their glory for an extra term or so?

In the teaching studio we as teachers can adopt strategies to discourage an unhelpful over-competitive environment. Rather than following a set pathway through certain books we can, for example, choose to individualise our programmes – meaning that the question ‘What book are you on?’ becomes futile as it is impossible to compare like with like. Similarly we can encourage parents who aren’t keen on exams to feel comfortable with that decision so that some students do exams and some don’t. This means that the ‘What grade are you on?’ question becomes meaningless.  Or students may do the occasional grade, which may or may not be the same as another student.

In student concerts we can deliberately mix up our programmes so that it makes it difficult to compare students of a similar age and stage. We can ask students to listen to the pieces being played and decide which they might aspire to play in the next concert. This focuses their minds on the idea of what they personally would like to learn to play rather than listening to others and judging whether they are ‘better’ or ‘worse’ than themselves.

We can value each performance in its own right and not audibly compare it with others. Our attitude towards cups and trophies can be ambivalent. Yes, we might be pleased that so and so won the Grade 8 prize aged 7 at the local festival – but let’s say a bright ‘well done’ at the beginning of the lesson and get on with the job of developing a talented musician.

Above all we can help everybody by refusing to have discernible favourites and treat all our students as valued individuals. (I distinctly remember that my piano teacher had a favourite called Kit. He was perfect and practised hard (not like me). I heard a lot about him and I didn’t find that it made me want to practise; quite the reverse.)

With parents, anxiety about their children in comparison to others can be particularly acute in the beginning stages. It helps to reassure them that young children may or may not take to string playing quickly. Some of my best students started slowly. I sometimes explain that it’s a bit like lighting a touch paper; some take off instantly, and others burn slowly for a time then off they go (others don’t, but that’s another story). After all the little boy on the climbing frame who I mentioned above soon got to grips with his fear and joined his friend at the top.

Let’s do what we can not to be sucked into competition for competition’s sake and keep alert to the bigger picture. Our students’ resilience to competitive elements out in the wider world will be built by their confidence that we believe in them as musicians who have something to say about the music they play. After all, when we pass them on we want their energies to be expended in the music, not on whether they achieve ‘success’ in the short term.