Rictor Noren, violin and viola teacher at the Boston Conservatory at Berklee, the New England Conservatory of Music Preparatory Division, and MIT, offers a grounding, exercises and repertoire suggestions to help you work on your martelé stroke 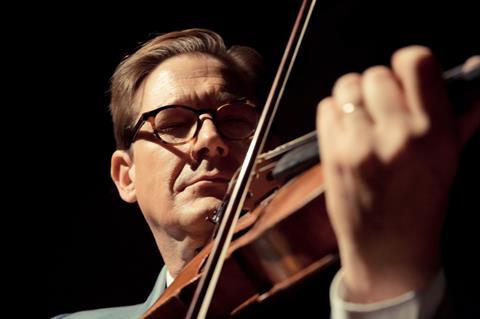 The first thing to understand with the martelé bow stroke is that it is not about the absence of tension: it’s about the release of tension at regular intervals. The moment the tension is released, the instrument resonates. The martelé stroke always starts with a click and ends with a ring. Most people get the click easily; they figure out what sort of resistance that takes. What they often don’t understand is how to release the tension in the hand and pectoral muscles to make the sound ring. I’m always telling my students to relax, relax, relax – it’s what we teachers do. But it’s only part of the story: if you were 100 per cent relaxed, you’d be in a coma! There is no such thing as completely tension-free playing. We have to understand how much to release at what point, and that is why this is one of the most difficult bow strokes to master. We have to understand:

Martelé is the foundation of every bow stroke: détaché, ricochet and so on. Staccato is basically martelé with a smaller bow stroke; functionally it’s the same. The most important thing to understand is the role of ‘letting go’. This is analogous to hitting a baseball with a bat: if you stop abruptly when you have hit the ball, without following through, you are going to hurt yourself. With a sense of follow-through, you can control the sound.

To start, divide your bow into four equal sections. I like to mark the bow using chalk, because it acts as a visual guide but also rubs off easily – I wouldn’t want to send older students to youth orchestra with tape on their bows! These marks will help to make sure that you really understand how it feels to get to each point.

Shut your eyes; play a martelé stroke that starts at the heel and ends at the first chalk mark.

Open your eyes once you’ve stopped, to see how you’re doing. How close are you to the mark? If you’re off, try again. This will help you to understand the spatial relationship between your bow and your strings.

Play a martelé note for each quarter of the bow.

Once you have mastered the stroke in divisions of four, divide the bow into three, then two; ultimately, advanced students should aim to play a whole-bow martelé stroke. You can practise each division using the early Kreutzer etudes (exercise 1). I am not a fan of taking an entire Kreutzer etude and working all the way through it: this can often be boring, and you might become distracted from your goal. It’s better to work on eight bars and to make those as beautiful as you can, from memory.

Ideas of rhythm should always be led by the left hand, not the right – this is far more secure, particularly when we’re feeling anxious. Having a finger-before-bow mentality while playing this exercise helps us to coordinate finger placement beautifully with the martelé bow stroke.

Remember to listen for that opening ‘click’, the ringing end, and everything that happens in between. It is what happens between the click and the ring that creates excellence. With the right amount of leverage, use of weight rather than pressure, and an understanding of the physics of what’s happening, rather than just throwing your bow on to the string and hoping for the best, you should be able to make even the cheapest violin sound magnificent.

We have to think very carefully about how the larger muscles in our pectorals, back, and shoulder blades feed into the movements we make with the smaller muscle groups in our arms, wrists and fingers. Many people tighten their right pectoral muscle when they play a martelé stroke. I’ve never heard a student with tight pectoral muscles play with a beautiful sound. 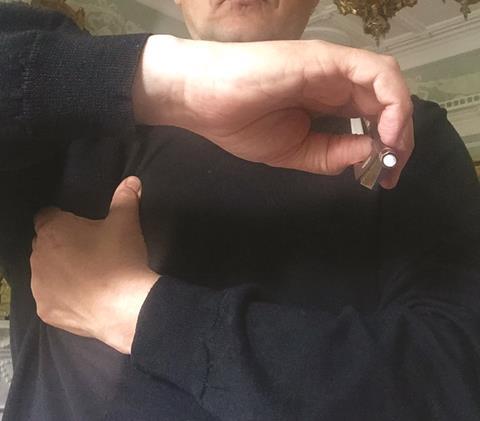 Firstly, put your bow down and swing your right arm. Feel the freedom in each of your muscle groups. Now, to help you understand the role of the pectoral muscle in martelé, pick up your bow again and try exercise 2:

Use your left hand to hold the muscle from your right armpit.

Tense the muscle and release it again, to ensure you know how you feel when it is both tense and relaxed.

Now pick up your instrument and play a martelé stroke, still with your left hand holding the muscle to check that it remains relaxed.

There is no sign for martelé in the repertoire. It’s not like a collé bow stroke: we don’t use it by itself. Even Kreisler’s Preludium and Allegro (example 1) is not really martelé, because we don’t stop the bow at the end of each stroke, although it can be useful: functionally we’re using the same muscles and we need the same release of energy.

Another useful thing to practise is the opening of the first movement of the Vivaldi A minor Violin Concerto (example 2). I have heard so many players who have been taught to play the bow stroke here with the ugliest sound I can imagine. Teachers often get their students to stop the bow at the end of each note, but what is the point? Ultimately we are looking for resonance and a beautiful sound.

The Bach Sonatas and Partitas can also be a vehicle for learning beautiful martelé using your upper body and back – although obviously you should never perform them that way!

Begin your practice by playing whole bows on open strings. Move on to martelé when you’re feeling comfortable. These kinds of bow exercises are great for the body and fantastic for the mind; we can work on them for the rest of our lives.

Not a day goes by when I do not start my practice with martelé. I use it to find balance in my body, to feel the connection between my feet and the floor, to think about my spine and to relax my shoulders.

The most important thing when mastering this stroke is to develop your muscle memory, so that when you’re on stage or in an audition you still have complete control of your bow. Technique is what we do in the practice room, and it is the last thing we want to be thinking about when we are anxious. The more we develop our muscle memory, and the more we understand the ways our bodies work, the less fearful we become of our instruments. Don’t be afraid to make mistakes.

Left to their own devices, childen will often move the right arm only from the shoulder. The teacher’s job is to help them create a circular movement between the shoulder, elbow joint and fingers, as well as rotation between the little finger and thumb. It is critical that teachers have an awareness of body mechanics and how to hone them.

The most challenging students are those who don’t know where their bodies sit on stage, or where their arms are in space. The first exercise given in this article is particularly useful here: if students close their eyes so that they can’t see the bow but instead have to feel how it is being distributed, their bow control will really improve.

My mandate as a pedagogue is to get my students to teach themselves. If they know what the goal is and how they should sound, they can record or video themselves, and describe what they are doing to me or one of their colleagues.

No.3 gives a perfect introduction to the martelé stroke: the notes are not challenging, and there is a rest between each one, allowing us time to listen for a ringing tone.

No.7 combines the martelé bow stroke with string-crossings, helping students to work on flexibility in the shoulders and pectoral muscles.

This article was first published in the August 2016 issue of The Strad which is avaible to buy in print here, digitally here, or through The Strad App on your mobile device