9 thoughts about playing on gut strings

String selection is a matter of personal preference, and depends not just on the violin being played, but also on one’s technical level, the colours the violinist wishes to produce with the bow and the gauge required. I look for sensitivity under my fingers, something I can only get with the more pliable gut string. It also makes my left-hand gliding technique more expressive. For me, gut strings offer a warmer quality of sound, especially on the A. They also make the E string even more brilliant. Listen to recordings of the great artists of the past and notice the warm and personal sound. It’s quite different from that provided by contemporary artists on synthetic strings.

Gut these days, both covered and uncovered, seems to me much more consistent than it used to be (either that or I’ve become much less fussy), and I don’t find the break-in a problem. The playing-in period becomes part of our natural exploration of sound colour. It only takes a few hours of hard playing for gut strings to reach their peak, and they remain there for a long time, until they eventually unwind, fray or snap. We might get the odd string that whistles or is a bit slow to reach perfection, and then we have to be brutal and discard it. Contrast this with synthetics. Granted, their pitch stabilises quicker than gut, but most sound truly awful when new. And once the first few hours of playing are over, they start a slow, miserable decline. Some last only a month at most. Eventually we find that we are uninspired by our instrument: worn out synthetic strings lose all those tasty high harmonics!

Are there any technical tricks to using gut? Yes. I clearly remember the first time I picked up an instrument with uncovered gut strings – I could hardly make a sound. It’s important to draw the bow rather than dig it in. Too much pressure with the first finger on the bow just dampens the sound, and can even stop it altogether. It is also important to use the big supporting muscles in the stomach and back, and let the arm, hand and then the bow just hang on the end of our torso. After that, clever adjustments of the fingers on the right hand can be used for articulations and inflections. Of course, all these things can help when using synthetic and metal strings, too. Moreover, the contact point (the place between the bridge and fingerboard where the bow meets the string) becomes much more critical with gut. We need to become adept at steering the bow around to get the contact point that we are after. Possibly the most important aspect when playing with gut is the need to be aware that the tilt of the bow makes a big difference to the tone colour. If our bow hair is too flat, the sound will become choked.

I’m always amazed at how easy it is to play on metal strings compared with ones made of pure gut. On metal strings, all the imperfections that easily occur when playing on gut strings are gone: for example, less projection on gut requires a focused sound to find the elusive sweet spot - the sort of difference you would find between playing tennis with a wooden racket, strung for slower speeds, and a modern tennis racket built for hitting hard. Gut strings, being made of natural material, are also much more vulnerable to atmospheric changes, mostly due to humidity levels. Add to this a Baroque bow that is almost twice as light as a modern one, with fewer hairs, and suddenly expressive playing is much more challenging.

What I find most enjoyable and interesting about playing on gut strings and with period bows, is the challenge of looking for sonorities. Gut strings have amazing blending capacities and ranges of expression, and simultaneously invite and challenge you to explore deeply the musical language of the vast quartet repertoire from the Classical and early Romantic eras.

I have always felt strongly that gut strings and period bows demand a much greater awareness of sound production and the different ways of crafting the sound. Each note becomes more detailed while at the same time being very sensitive, demanding from the player a higher awareness of its life. The sensation of playing is so refreshing. In discovering this ‘period approach’ I quickly felt there was so much more to making sound than I had ever imagined. It has been a great learning process, especially in regards to the bow hold, the vocal qualities of the notes produced, and the detailed pronunciation and variety of characterisations.

I think that gut strings are very nice: you can make some very horrible sounds, in the best possible way; and you can also get some incredibly human, tender sounds from them. Sometimes I really hate them, because they are unreliable, they break and I think, ‘Is it really worth it?’ Then I hear them and I think, ’Yeah’.

With a conventional modern set-up you tend to put the bow on the string and then start the bow moving to coax the sound out. With a gut string and a Baroque bow that approach doesn’t work - the string chokes and you get a horrible grinding sound. [Royal Conservatoire of Scotland professor Jennifer Ward Clarke] showed me how to start the note from just above the string, a bit like a pizzicato attack so that you immediately get the string ringing. You then just keep it breathing as you draw the bow across. She taught that the expression, the tone and the singing qualities all come from the bow - the left hand is more a mechanical device for stopping the strings.

An important aspect is the core material of the strings that are being used: steel strings are more easily played if you use a hard, dry rosin, whereas for synthetic, gut, and gut-wound strings you need use a softer rosin

Equipment is not even of secondary importance to me when we’re talking about getting results in Baroque music … The type of bridge and the material in the strings – they can’t be recreated anyway, as there were so many variants in Bach’s time.

In Bach we are talking about death and desperation …The hindrance comes when you look for grandiosity, mastery and invulnerability and just go after ‘a good sound’.

I strung my violin with pure gut strings that were designed to be at full tension for A = 415Hz (so approximately a semitone lower than our modern concert pitch … I persevered with them for almost a month and thoroughly adjusted to them - but to my ears, I never found them tonally satisfying. I am happy to concede that the fault may be in my own musical conditioning, but the sound they produced seemed somehow to lack variety. I have huge respect for musicians who spend their whole lives playing on gut strings; I also concede that a month is hardly enough time to effectively master a completely new way of playing. But for me, it was enough time to decide that they weren’t going to offer me enough tonal variety to make the 120 minutes of solo violin music on the discs a compelling listen. In the end, I decided on using Pirastro Oliv gut-core strings at the modern pitch of A = 440.

Watch: Gut strings being manufactured at the Aquila factory in Vicenza, Italy 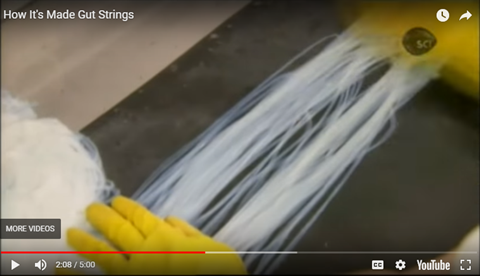