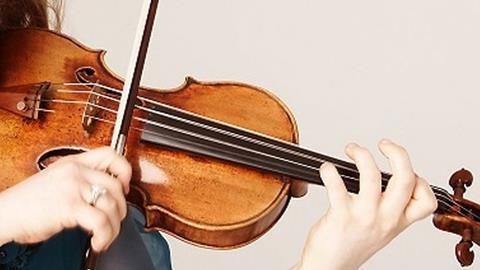 B)    Keep extensions to a minimum, but when extensions are necessary, do not let the extended finger pull the hand out of position.

C)    Watch YouTube performers with your hand size if you need ideas (use Google Chrome to watch in half tempo).

A)    Keep the old finger on the string and use it to measure the interval to the new finger.

B)    In bariolage passages, 'walk' fingers from one melody-note finger to the next - don’t lift the old finger while the bow is playing the drone note!

C)    Use in-between fingers to help measure the space - e.g. when going from 1st finger to 4th, 'ghost play' the finger pattern for 2nd and 3rd.

D)    Keep a finger down if you’re going to return to it.

9)    THE FASTER AND HIGHER THE PASSAGE, THE SMALLER THE HALF-STEP SPACING

A)    The ear demands that ½ steps are smaller on fast passages, and on high passages.

B)    Land the lower finger on its thumb-side corner in order to minimize the space between half steps.

C)    In high passages the close spacing requires half-step fingers to exchange with each other (the new finger must bump old finger out of the way).

A)    Relax on the note(s) before the shift, and glide with light touch in an unhurried manner.

C)    To find a high note 'out of nowhere', choreograph a plan to map out guide-fingers. Pencil in the guide-finger notes.

D)    If the string is sticky, put a little Vaseline on your finger tips to allow the fingers to slide easily.

A)    Know the name of the position and how your hand feels in that position.  Š evÄík op.8 is great for this!

C)    Practise landing on a note repeatedly - dropping your hand to your side then landing on the note.

D)    During a rest, or while getting ready for the first note, tap the finger of the upcoming note in order to hear the pitch and to make sure hand is in the right place.

F)    For most players the thumb’s landmark for 5th position is 'thumb in the saddle', and for third position the thumb will touch exactly in the middle of the neck.

G)    For fast shifts involving 4th or 5th position, throwing the thumb forward into the saddle, and allowing the base of the palm to hit the rib serves as a useful 'bumper'.

Advanced students can refine their intonation by deciding which tuning system is appropriate for each situation:

Equal temperament (ET) is what most pianos are tuned to, and what chromatic tuners use. Each half step equals 100 cents and the octave is divided into twelve equal parts. When playing in octaves or unisons with a fixed pitch instrument such as the piano, equal temperament is the choice of most string players.

Minor Third: About than 16 cents larger than Equal Temperament

Major Second scale degree  (re): Up to 4 cents higher than ET

Minor Third  scale degree (me): Up to 6 cents lower than ET

Read: 12 ways to encourage your student’s pickiness about pitch – part 1

Read: Ask the Experts – how to help a beginner pupil with intonation issues

Meredith Arksey is an associate professor of music at Washington State University. She is the coordinator of the string area and teaches studio violin and viola to undergraduate and graduate string majors. She received her bachelor’s and master’s degrees in violin performance from the University of Michigan where she was a student of Camilla Wicks, and a string pedagogy graduate teaching assistant under Robert Culver. She received her doctorate in violin performance from Michigan State University where she was a student of I-Fu Wang. She is the violinist in the Palouse Trio, and since 1989 she has been a violinist in the Silver Bay String Quartet. She is a National ASTACAP adjudicator and past-president of the Washington American String Teachers Association.

Meredith presented a session on this topic at the 2016 American String Teachers Association conference and will present again at the 2017 conferenece, taking place from 1-4 March 2017.