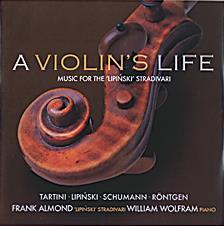 This disc is the outcome of Frank Almond’s mission to chronicle in an artistically meaningful way the performing history of the 1715 Stradivari violin named after the Polish violinist Karol Lipinski. Its programme maps the instrument’s ownership through almost three centuries, reflecting its possession by a student of Tartini, Lipinski, (embracing his close associations with Schumann’s circle), the Röntgen family and eventually, via other violinists, by Almond himself.

Almond does not use the optimum musical text for his account of Tartini’s ‘Devil’s Trill’ Sonata, which, though not especially stylish, is sweet-toned, athletic and suitably demonic, underpinned by his rock-solid technique. He and pianist William Wolfram seem more at ease in the Romantic idiom, forming a cohesive unit and finding a winning balance between assertiveness and lyricism. This is the case whether in their well-shaped reading of Julius Röntgen’s Brahmsian Violin Sonata no.2, lightened by its folk-influenced centrepiece, their appropriately reflective, mercurial interpretation of Schumann’s intense Second Violin Sonata op.121, or in Almond’s technically proficient but somewhat eccentric version of Lipinski’s Caprice op.29 no.3. In this close yet finely balanced recording, the instrument’s pedigree is especially demonstrated in the duo’s compelling, emotional accounts of the expansive outer movements and the chorale variations of Schumann’s Sonata.